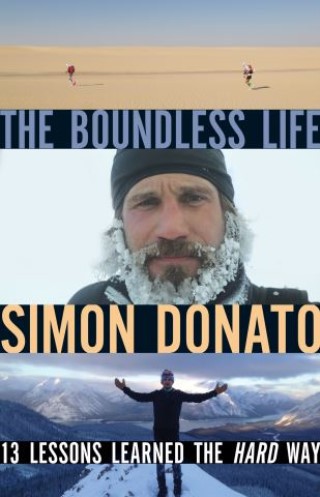 “In the end, these people helped me realize that Boundless was more than a job; it was metaphor for life. It came down to one simple, daily decision—do I stand still or move forward?”

Filming the hit television series Boundless, Simon Donato has raced thousands human-powered kilometres across the globe—from the frigid tundra of Iceland to the searing heat of the Sahara, journeys that strip away the regular trappings of life and pit us against ourselves and the natural world. There are no modern conveniences to lean on as crutches, and every metre gained is earned through both physical and mental effort.

In his compelling first book, Donato details the quest for adventure and the opportunities to test ourselves in a very primal way—in ways that we aren’t able to in our lives very much anymore. Describing the key moments and adventures that put him on the path to Boundless, Simon takes you on an adventure-filled journey around the globe and shows how you can apply his lessons and experience to your everyday life.

Adventurous, ambitious and competitive, SIMON DONATO is the driving force behind the hit television series Boundless. Donato, who has a PhD in geology, has travelled extensively to race and explore the planet. When not testing the limits of his body, he runs his oatmeal company, Stoked Oats, and Adventure Science. Adventure Science collaborates with industry, governments and researchers to conduct discovery expeditions, map uncharted territory and contribute to search-and-rescue missions around the world. Donato is a Fellow International of the Explorers Club and a member of the Royal Canadian Geographical Society College of Fellows, and splits his time between Canmore, Alberta, and his Long Trek Ranch in Sheenboro, Quebec. He lives with his wife and his dog, Gertie the #adventuretank.